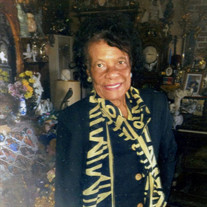 Alice Louise Jackson “For God so loved the world that he gave his only begotten Son, that who so ever believe in Him, shall not perish, but have everlasting life.” [John 3:16] Alice Jackson was born to Ned Scott, Sr. and Dannie Mae Gordon in Snow Hill, Alabama on July 10, 1928. One of her earliest accomplishments upon graduation from high school, was earning her certification as a Registered Nurse. Alice was married for 53 years to her loving husband Lindsey Jackson, Jr. until his passing on February 22, 2004. Mom’s cooking and snack trays were famously known and relished by everyone and anyone whom ever stopped by for a friendly visit be it breakfast, lunch, dinner, or endless late night snacks! In addition to cooking Mom loved fishing, and landed a whopping 22 pound stripper in July 1971. Mom also enjoyed sports and particularly watching her children, grandchildren, and great grandchildren compete in baseball, softball, basketball, and football. Alice served as Manager, Chaperone, and Team Mom for a number of Bobby Sox teams on which youngest daughter Iva was a player. Mom was an avid Oakland A’s baseball fan and during the season could be found preparing something good to eat in the kitchen with the A’s on both the radio and television in several rooms and the same could be said of the 49ers during football season! Mom was also a “lucky” person and would routinely hit jackpots ranging from a couple dollars to a few thousand dollars via lotto scratch-off tickets and Cache Creek slot machines, and would be oh so happy to share her winnings with that smug and loving smile that warmly says “I won a little something”. Alice is preceded in passing by husband Lindsey, her brothers Ned Scott, Jr., and John “Johnny Boy” Scott, sister Earline L. Scott Floyd, grandson Lindon Marsh, and son-in-law Bernard “Dino” Thompson. Those left to cherish Mom’s memory are her five loving children including daughters Alice “Beep” Wright, Linda Marsh, Joyce Thompson, and Iva Jackson, and son Michael Jackson; six grandchildren, Yvette, Donny, Lindsey, Bino, Taylor, and Jack; and seven great grandchildren, Azhane’, Daejia, Abrhame, Mikey, Malachi, Bella and Dru. Mom will be missed by many, and will be loved by many many more.

Alice Louise Jackson &#8220;For God so loved the world that he gave his only begotten Son, that who so ever believe in Him, shall not perish, but have everlasting life.&#8221; [John 3:16] Alice Jackson was born to Ned Scott, Sr. and Dannie... View Obituary & Service Information

The family of Alice Louise Jackson created this Life Tributes page to make it easy to share your memories.

“For God so loved the world that he gave...

Send flowers to the Jackson family.