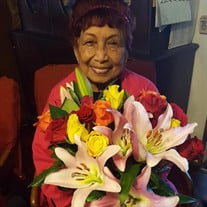 ALICE VELASQUEZ BAHIA April 7, 1926 – July 23, 2019 Alice Velasquez Bahia, 93, passed away on July 23, 2019 in NorthBay Medical Center. Alice was born on April 7, 1926, in Nueva Viscaya of the Philippines, a daughter to Roque and Rosa (Alindada) Velasquez. On Nov. 30, 1957, she married Jose P. Bahia Jr. at England Air Force Base, Alexandria in Louisiana and he survives. Alice was a lifelong civilian worker starting as a flight nurse. Later she pursued the dream of becoming one of the first Nurse Practitioners in the US. She went to Texas to study for four years and got her Master’s to become a Nurse Practitioner and later continuing her education, became an OBGYN Nurse Practitioner. In her later years, she became an educator and taught many nurses, traveling as far as Saipan in the Northern Marianas and also stints in Jordan and reservations in Arizona. She is survived by her husband, Jose P. Bahia Jr. of Fairfield; three sons, Philip Bahia of Fairfield, Jose Bahia of Livermore and Vincent Bahia of Fairfield; one daughter, Barbara Mattis of Vacaville; and four grandchildren, Maleina, Victor, Leah and Jaxon; along with many other loving friends and family. A visitation will be held from 4 to 8 p.m., with Rosary at 6 p.m. Tuesday, July 30, 2019, at Bryan-Braker Funeral Home, 1850 W. Texas St., Fairfield. The celebratory Mass will be at 11 a.m. Wednesday, July 31, 2019, at Our Lady of Mt. Carmel Church, 2700 Dover Ave., Fairfield, with a hosted reception following the service. Arrangement are under the care of Bryan-Braker Funeral Home, 707-425-4697. You may sign the guestbook at www.bryanbraker.com.

The family of Alice V. Bahia created this Life Tributes page to make it easy to share your memories.

Send flowers to the Bahia family.