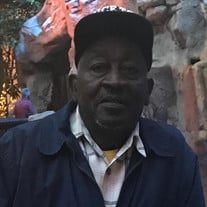 Breath was given to the body of Mr. Albert Lovett on November 20th, 1937, in Jackson County, Marianna, Florida. Seventh born in line to the dearly departed Mr. Frank and Mrs. Leader Lovett. Albert Lovett had accepted the love of Christ and was baptized at an early age. In his youth he was rambunctious and in order to expel his energy he became an avid baseball player; during that time, he attended school and successfully graduated from Jackson County Training School, in Florida, of 1959. Upon marrying Lula Dell, their union gave birth to one son, and one daughter. In his adult age he became a devout member of True Love Baptist and assisted them wherever he could. On August 31st, 2021, Albert heard his last call from the lord, and he answered. He is preceded in death by, his father (Frank Sr), and his mother (Leader Lovett), his siblings; Frank Lovett, Robert L. Lovett, Foy Lovett, Edward Lovett (Stella), Ed Neal Holden, and Donaldson Lovett, all of Marianna Fl. He leaves behind his cherished ex-spouse Lula Dell (Myrick) Lovett, son Artola Lovett, daughter Margaret Lovett. His grandchildren; Drucilla Lovett, Jeremiah Lovett, and Shasa Lovett. And his great granddaughter, Melodie Serenity Blissful Lovett, and his last surviving sister Ruby Keel of Marianna. Mr. Albert Lovett made Fairfield California his long-term home to which he loved wholeheartedly. Raising his children, and grandchildren, in the same town nearly all his life. Albert Lovett started working at Travis air-force base when he first came to Fairfield. Afterwards he took up work in the city of Fairfield Correctional Facility, then became a chef for Holiday Inn for several years, to add on, he also worked at the Muffin Tree restaurant, the city of Fairfield school district, and assisted work in Norms Hytech Auto. He had numerous work relationships within many areas within Fairfield, so many it would take the entire page to list. This is what he most passionately loved to do - work within his community. Alongside those adventures, he also was very passionate to work for his church - True Love - within the culinary department as a culinary director. Truly the city, and all its entirety, will miss him dearly.

Breath was given to the body of Mr. Albert Lovett on November 20th, 1937, in Jackson County, Marianna, Florida. Seventh born in line to the dearly departed Mr. Frank and Mrs. Leader Lovett. Albert Lovett had accepted the love of Christ and... View Obituary & Service Information

The family of Albert Lovett created this Life Tributes page to make it easy to share your memories.

Breath was given to the body of Mr. Albert Lovett on November...

Send flowers to the Lovett family.